Lucy in the Sky… 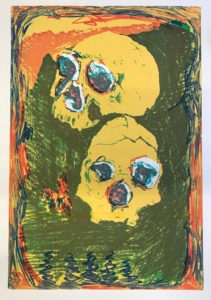 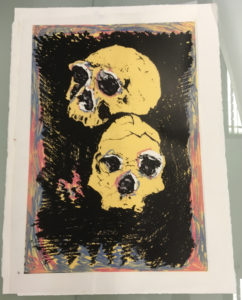 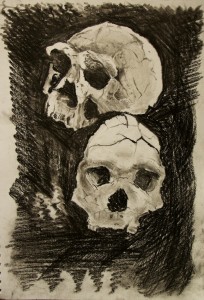 This will be the final version of this image; the fourth screen-print based on a pencil drawing. The source of the drawings were two separate photographs in a book called From Lucy to Language. Both the print and the original drawing are included, for comparison purposes.

The author presents the evidence for human evolution using artefacts like these two skulls, other skeletal remains and art from pre-history. At the centre of the arguments he presents are these skulls and skeletal remains, now fossilised in stone and painstakingly seperated from the surrounding rock—at least in places where thousands of years of erosion have made them accessible to the tools of those who seek them out, inelegantly named paleoanthropologists.
The skulls and skeletons themselves are stone, as through the slow Medusa of trickling water the organic material is replaced by mineral. To further remove these artefacts from the individuals they used to be there is pressure, immense pressure over the millennia crushing and distorting the skulls; often fragments are missing and educated guesses have to be made during the painstaking reconstruction. Even more difficult a task is the removal of the rock which surrounds the skull, which can often take many months of careful work with fine drills.

As they erode out of hot African hillsides they are collected by scientists to become cultural artefacts. They take on other existences. In one famous case a fossilised skeleton of an unknown ancestor of our species saw the light of day after 3.2 million years. She was given a whole new identity and the name ‘Lucy‘.

The discovery of Lucy was regarded as a career defining moment for a young paleoanthropologist called Donald Johanson, when he noticed a two inch long fragment of an elbow bone sticking out of the ground. That evening after a meal of roasted goat and beer he chose the name, for what became an incomplete skeleton, from the Beatles song ‘Lucy in the Sky with Diamonds’ which was playing in the background as he ate.
Lucy as an individual  no longer exisited. What was left of her had been washed away — in a sense — and replaced by rock. The process of taking ownership of  her through her naming was  a process of her becoming a valuable object,  a cultural prize. Lucy’s resting place at the moment is as a prized possesion of the national museum of Ethiopa.

Johanson is a very engaging person, not at all stuffy, and he conveys both the tedium and the excitement of his work through his writing. He is human enough to feel great discomfort about the choice of name. In a second book he wrote he describes the discovery and the naming ‘ceremony’. Later in this book (Lucy’s Legacy: The Quest for Human Origins) Johanson’s guilt at allowing an English label to be attached, however informally to an Ethiopean fossil, is very apparent. Never does it occur to him that this agonising over a label is an absurdity, as Lucy and her kin lived in a time when Ethiopia did not exist. Almost certainly her tribe would not have had any conception of nationhood in the way modern man perceives the concept. Indeed, as one of our earliest ancestors, she would not have had a personal name in the sense we would understand it.

A further absurdity is played out when an Ethiopian dignitary performs a second, more official naming ceremony. As the Minister of Culture he states with the firmness of this political authority that her name must be an Ethiopian name, and he chooses Dinkinesh. This Amharic name meaning ‘you are marvelous’ appears to relieve Johanson’s guilt. To little avail of course as she has been universally callled Lucy ever since.

The print which prompted this diversion in to archeology is available for sale in the Glasgow Print Studio Shop.