Painting of a nude – Acrylic and Nylon Stocking 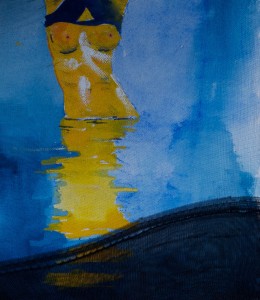 This can only be described as a very simple painting. The original image was a colour photograph, which contained both the head and torso of the woman. My interest was in the reflection, and what effect the textural qualities of the stocking would add to the foreground, containing the rippling water, distorting the woman’s reflection.

I used thinned acrylic, in two main colours, on canvas. As an experiment I then stretched and stapled the black nylon stocking over the painting. The black curved area is the top of the stocking. The attempt perhaps to be ironic? No, I think not. I was interested in the degree of subtlety that could be added to a crude image that was executed very quickly, with the feel of watercolour sketch. The top of the stocking does add a heavy structure, that could be taken for a rock. The eye of the observer should wander down the reflection and be halted by the black shape.

The fine mesh of the stocking is hardly visible, merely softening the woman’s figure and adding, hopefully, to the subtle tones, almost defining a horizon, (where does the water end?). Perhaps I am unfair to myself with adjective ‘crude’.