And I
Am the arrow,

The dew that flies
Suicidal, at one with the drive
Into the red 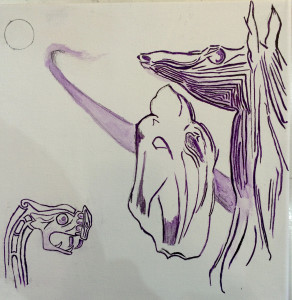 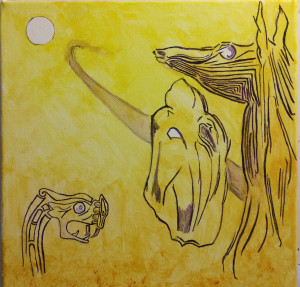 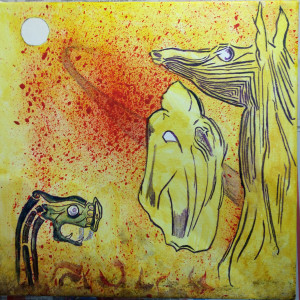 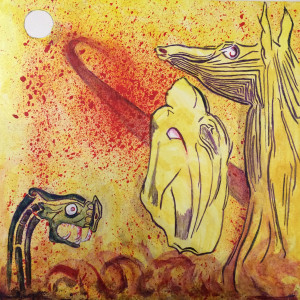 The photographs document the obvious stages in my most recent painting. The work is painted  in acrylic paint on canavas. The composition was assembled from three different sketchbook drawings. The drawings were copied lightly in pencil and then outlined in an intense violet mixed with a small amount of Prussian Blue. Two thin washes of colour were then applied over the drawing. A cool lemon yellow from the top left corner diagonally to the centre of the canvas.

After that the image coalesced from my unconscious, and memory. The title and subject are described in the well known poem by Sylivia Plath called Ariel. The quotation at the beginning of this article are at the end of the poem. The red whiplash into the eye of morning. Though in this case the sun, “the cauldron of morning” is white.

The anger that Syliva expressed in the ‘Ariel’ poems did not reflect in the dark pool of her eventual suicide. Her death was perhaps relatively gentle, notable for her protecting her children sleeping in a room just a few feet from where she lay down, rested her head on a folded towel laid in the oven, and drifted away.

The anger was left behind in the poems for her husband Ted Hughes, in a folder on her desk. A difficult legacy for him and his children. Reading her journals, and the poetry he wrote about his first wife (‘Birthday Letters’), it would seem that the truama was lifelong. It is arguable that the payment of Sylvia’s  legacy fell to her children to make from the short life of her son Nicholas, and the artistic struggles of her daughter Frieda. Both children have made and in Frieda’s case continues to make positive contibutions to the world they live in.